As a large and complex project, the hospital extension generated a serious challenge: to blend high medical standards with playful elements that recreate the outside world inside the hospital. The main goal was to generate a lively space where children forget as much as possible that they are sick and  where they play and enter a magical world, away from the serious health problems they face and the unpleasant effects these health problems generate for them (not being able to go to school, not being in contact with the outside world, not having any friends close).

Our proposal: “The Tree of Life” – a semi-virtual architectural space, where different levels of nature conquer the hospital through videos, sounds, scents and fantastic stories that lure children into play.

We imagined a scenario revolving around a central theme, the tree of life: throughout the entire height of the building, based on the floor you are on, you can discover and observe different levels of the tree. The basement is the root of it all: this is the world of hard rocks and you can also find here the cave of an underground animal. The proposed design colors here are darker, mostly brown shades. From the mezzanine up to the fourth floor, we enter the worlds of the stem levels: green is the major shade of the design and here are the most interesting and active components of the proposal: the atrium, the cinema,the green terrace, the sports room, the play areas connected to the visiting areas. The last two, the fifth and the sixth levels, are home to birds and flowers, and as such, these are the design elements noticeable here.

The hall that contains the elevators of the vertical nucleus has a light installation that allows you to quickly identify the level you are on: at the two levels of basement, this wall has roots and a mole (second basement),  a rabbit in its underground home (first basement), a camel bird on the ground floor, a kangaroo on the first floor,  a giraffe is on the second floor, butterflies on the third floor, monkeys swing on the fourth floor, owls fly over the fifth floor and on the sixth floor one can find sparrows.

The outside skin of the extension is modular and the grid is generated by the yellow frames of the windows. The windows offer various perspectives over the surroundings and have a place to rest while doing so.

There is no secret that the actual construction norms tend to push the extension at certain safety distances from the initial building and also generate spaces that will rarely be used. Rem Koolhaas calls these junk spaces and we, as a part of our design phase, wanted to mark these spaces as they are, even with their debatable importance, still present and still part of the project. As such, the evacuation staircase became a bright yellow, present tower that will be used only in case of emergencies, if ever.

This place is tall enough for a giraffe to stretch out its neck without getting hurt! Well lit and reaching out for the sky, it is designed as a play area for children and a coffee break for parents.

Yellow houses frames sit quietly aligned on the third floor, awaiting the joyous laughter and playtime of children. Here is the space where children can enjoy some fresh air and peep through colored circles at the outside world. 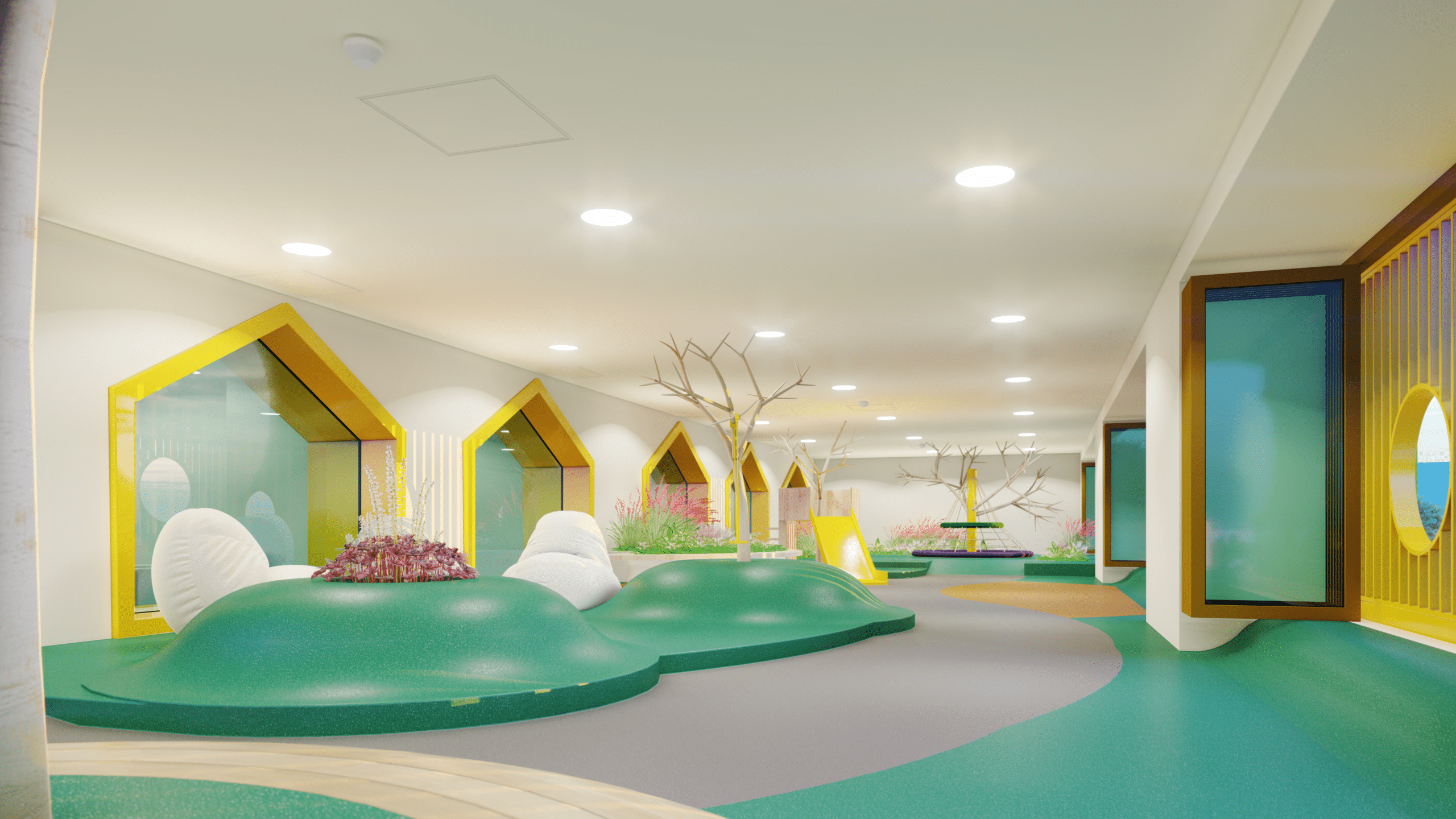 THE ROOMS AND THE BATHROOMS

These spaces are for a longer time for some children, a sort of home.Smaller versions of the comfortable places they know as safe to be in, these spaces transform and adapt: there is room to play, there is a cozy place at the window for either children or parents to sit at and observe the surroundings, there are foldable beds for the parents. We have also provided enough storage space for each room and the layouts of the interior design follow the rule that the spaces are easy to use and easy to clean.

Bright colors lift the spirits up and help the mood, as the battle with serious diseases becomes lighter and easier to handle in a friendly, comfortable and safe space. 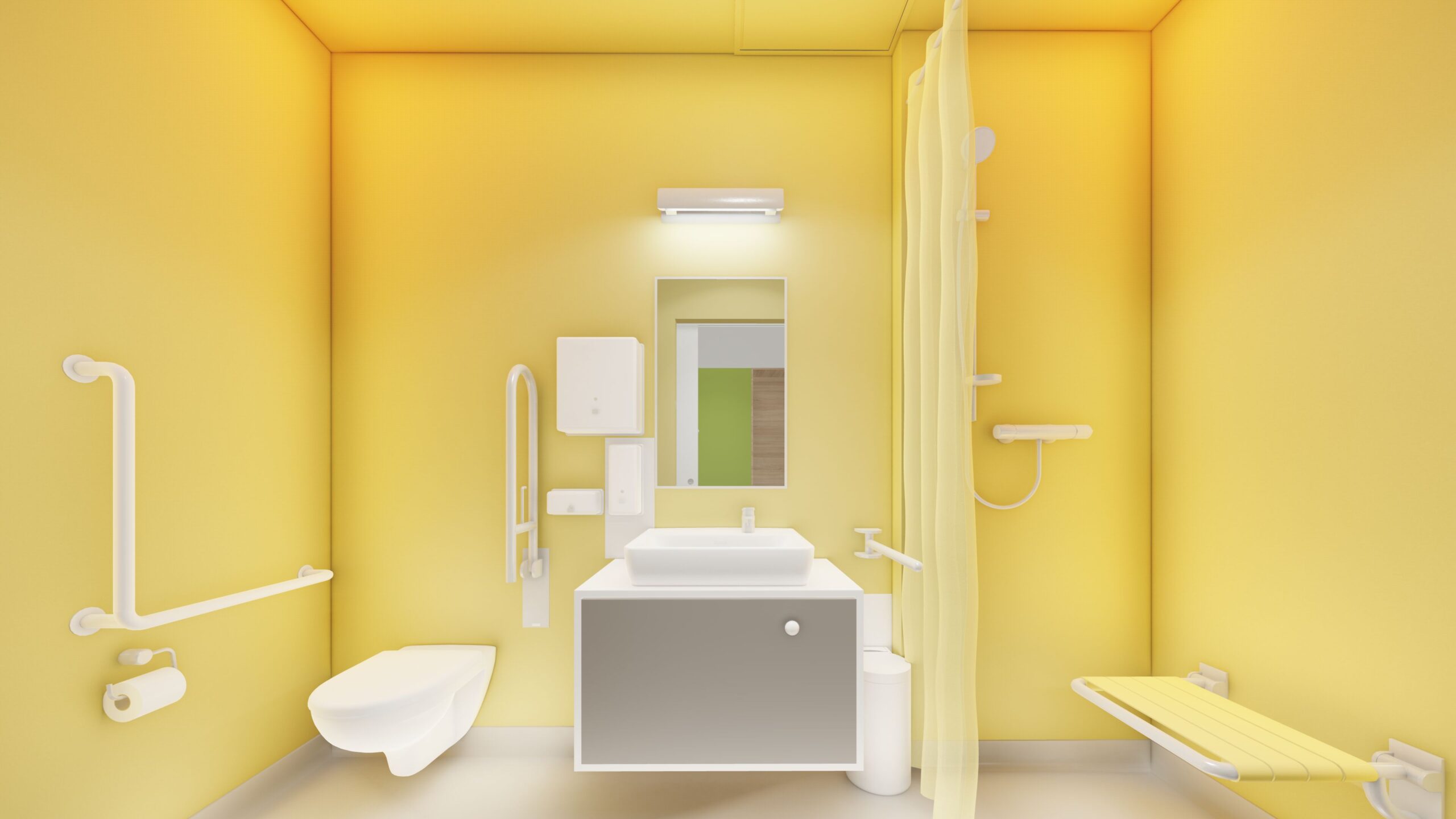 When children go quiet, you know something magical will happen. The projector will surely captivate the children with interesting stories and animations, as part of an away from home routine that is – we say – as farthest as possible away from boredom. 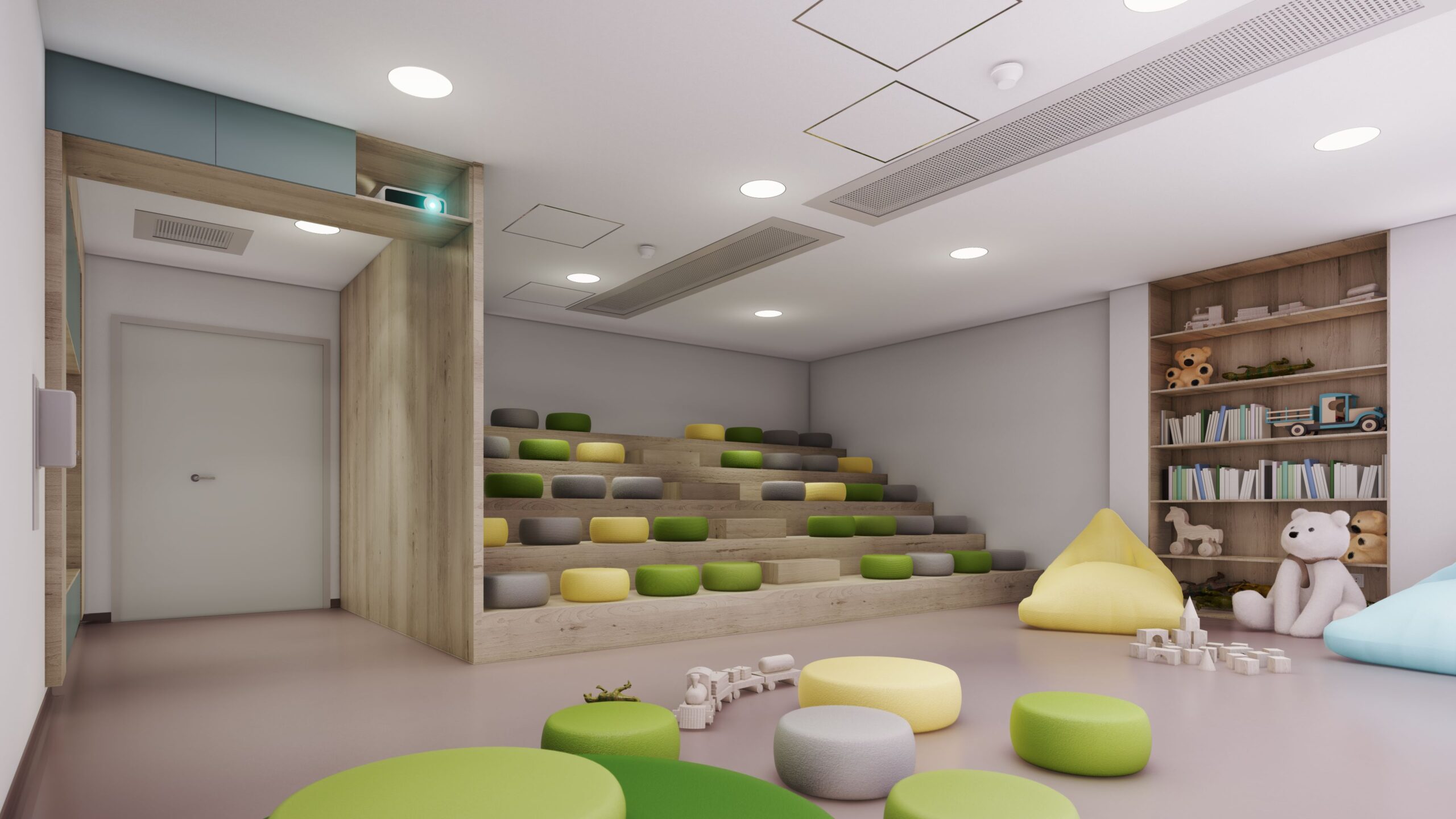 Need something similar? Schedule a meeting.

Any cookies that may not be particularly necessary for the website to function and is used specifically to collect user personal data via analytics, ads, other embedded contents are termed as non-necessary cookies. It is mandatory to procure user consent prior to running these cookies on your website.